Counted Blessings: Thoughts Of My Mother

At my second wedding, a guest asked my mother if she cried. My mother wore her oxygen tank over a champagne-colored dress. Her lungs filled with fluid. She moved slowly and with caution. “How could I cry when she looks so happy?” she said. As she was too sick to attend the reception, a family friend drove her home. I barely hid my disappointment. A year and a half later, a respirator paced her breath, and she occupied an emergency bed at Butte, Montana’s St. James Community Hospital, the hospital where she birthed her four children, the hospital where she watched her son die.

My father called my office in Polson to tell me that she had been admitted. His voice was tight, constricted. He had polio as a kid, lived through the depression, served in the Korean occupation and lost a 22-year-old son to a fatal motorcycle accident. If he was scared, it was bad. I cancelled everything and drove home to Butte.

When I arrived at the hospital, my mother looked at me. Her hazel eyes said the same thing to me that they said to my two brothers when they arrived: “I’m glad you’re here.” A day later, she was in a coma. In a moment, any petty grievance I had ever held onto, anything I had ever thought she should have said or done differently, vanished. Nothing mattered but this: She was my mother and I loved her. All I wanted was one more chance to be kind, to tell her how grateful I was that she, not anyone else in the entire world, was my mother. I wanted one more chance to be a good daughter.

And I got it. Mom came out of the coma and lived another full year. For her 71st birthday, I made grilled cheese sandwiches and her favorite, tomato soup. At her request and under her guidance, I planted purple irises and strung the wild sweet peas up the porch. When Nana, my grandmother, died that September at the age of 95, I stayed with my mother long after the funeral.

In November, following her directions, I helped my father cook the Thanksgiving turkey. By Christmas, she was too ill to get out of bed without help. I sat with her and listened to her. She told me that when they were young, she and my father would put us kids to bed and cook romantic dinners for just the two of them. They’d eat lobster to celebrate the New Year. She said it felt so good to be in touch with Mark, my brother who had died twenty years before. She said that Nana looked good, that she didn’t know what she’d say to the Father when she saw him. She asked for lobster to celebrate the New Year.

The four days before she died, I sat with her, fed her applesauce, gave her drinks of water, helped her walk the five feet to the bathroom, read to her, and held her hand. Once, when she woke up startled, I asked, “Are you afraid, Mom?” Yes, she nodded. “I promise it will be alright. You’ll be with Mark and Nana and God. Our love will always be with you. And I hear it’s really beautiful over there.” She calmed down and slept again. That night she went into a coma; by morning, she was gone.

Twenty years before, at Mark’s funeral, I had learned the wonderful protection of shock. I had asked my mother again and again, “Who’s that person, Mom?” With her usual courage and quiet dignity, she had given me the names of each visitor, one by one, patiently tending to me in spite of her own grief.

She raised four children through the ’60s, supported my father through one adventure after another, willingly helped her church and neighbors and gave to others in need without thought of her own needs. She was one of those quiet people who made the world a better place by consistently loving her family, her home and her community.

At her wake, my brothers and I stood nearby while our father handled the evening with gratitude and grace. They had celebrated their 50th wedding anniversary that previous summer, and many of the people who wished them blessings then offered their sympathies now. My father said how grateful he was to have had Mom in his life for those 50 years. He wept at the kindnesses of other people.

That first morning after she passed on, I awoke feeling a presence. “Oh yes, they let us do this for a while after we die, go between worlds.” The words popped into my head. The next morning, I dreamed she rose before me in awe and wonder. The third morning, I awoke to her words from my wedding two years earlier: “How could I cry when she is so happy?” It was as if she was saying I don’t need to cry, that she no longer suffers, that she is happy.

In the cemetery one day, I thought I heard her voice in the wind and again, later, on the radio. I smile to think of her coming to me like that, in my sleep, on the wind, or in a song. Still, sometimes I cry. I cry because I learned so late that only the love we share matters. I cry when I can’t remember how long to cook the turkey or how to make the sweet peas bloom or just where to plant the irises. I cry because I live in a world wrought with subtle challenges, a world of problems and victories, a human world. I am a woman who needs my mother, and I miss her.

On other days, I remember her courage and quiet dignity. I remember her sure guidance and unending love. On fall mornings, before the leaves drop, I feel her beautiful, strong spirit, and I allow her blessings to shine through me. Through gentle determination and faith, she made the world a better place, and I do my best to follow her example. 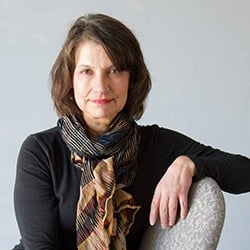