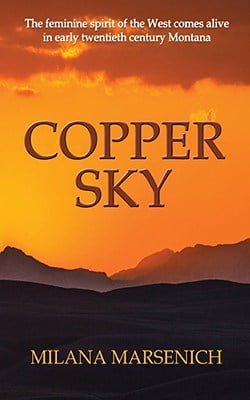 The initial inspiration for Copper Sky came from a dream that I had after reading A. Den Doolaard’s 1958 novel The Land Behind God’s Back. The story talks about a young engineer who builds abridge over the Tara Gorge in Montenegro just before World War II. The war starts and he blows the bridge up to keep it from falling into the hands of the enemy. He is later captured and hanged over the Gorge. My dream was about a woman who loved him and waited for him to come home. In the dream she was a healer and she couldn’t understand the brutality of war. I woke up and wrote the dream down which became a short story, a story that was far too expansive to be so short. I decided to turn it into a novel.

When I presented the beginnings of that novel to a teacher, he asked if I’d ever been to Montenegro. At the time the answer was no, but my great grandparents had lived there, and I knew their stories. He suggested it would be difficult to write a book placed in country that I’d never been to, and that I should place it closer to home. Immediately I seized on the idea and set Copper Sky in Butte, Montana, my hometown. I’ve lived and worked in many places but my heart has always returned to Butte. I wanted to write something that represented the courage and generosity that I’ve witnessed through out my life, and first experienced in Butte, Montana.

My father was a great storyteller and I grew up listening to his stories of Butte and Montenegro. My paternal great grandmother in Montenegro saw the white wolf following her. She could stop a snake with a whistle. She had once crossed a mountain haunted by the ghosts of unburied soldiers to save a child’s life. From these stories I deducted that she knew how to heal through herbs, folk remedies, and all of the mysteries of the invisible world. I drew my inspiration for Marika’s character from that initial dream, the stories of my paternal great grandmother and all that I’d imagined her to be. I felt so close to her, a woman I’d never met,that I can’t help but wonder how many of her stories got mixed up with the stories of my maternal great grandmother, a woman I did meet. She was a midwife in Philipsburg, Montana and delivered over 500 babies. She had eleven children and outlived all but two of them, dying when she was 93. She was also as a healer, using natural and herbal remedies to kick out disease and promote recovery, and when they didn’t work, she saw the white horse—as I remember it—as an omen of death.

More inspiration for Marika came from my father’s side of the family. In Copper Sky Marika dodges a prearranged marriage to become a doctor. My paternal grandparents’ families put them together in a room to discuss a possible marriage. The conversation went something like this: “Do you want to get married Jovanka?” “I don’t care Milosav, do you?” “Well if you do.”“Ok then, if you do.” And they got married. Ultimately they did choose, but the idea of it came from their parents. They stayed married until my grandfather died, about 45 years later. My grandmother was significantly younger than him and, as I wrote Copper Sky, I wondered how did she get to “yes”. Was it really that simple? Or did she have time to think, fight, and decide?

Kaly Shane is orphaned as an infant. Things don’t go so well for her and she ends up working as a prostitute in Butte’s Red Light District. She retains a professional distance which becomes much more difficult when she finds herself pregnant. She wants a good home for her child, something completely different than her own upbringing. The inspiration for her character comes through my many years of working as a therapist with children in the foster care system. I’ve had the opportunity to witness their courage, self-reliance and fierce fights for survival. Many of my clients have developed grit and determination in learning to trust and work through a multitude of traumas. The spirit of this work informed Kaly’s character.I tried to imagine what experiences in the early 1900’s would push a woman to live the dangerous life of prostitution. I thought about how the traumas of our lives affect us, as well as the traumas of a town, and maybe even the traumas that happen before we were born. I thought of all of the ways that love heals and transforms pain as cornerstones for Kaly’s character.

Throughout Copper Sky a white dog wanders the streets of Butte, representing the good heart of the town. He is a guardian, both alive and ghostly, who watches over Kaly, her deceased twin sister, and others. He travels through time with “an old time miner on the edge of his last dust-filled breath”. The inspiration for the white dog came from my paternal great grandmother’s white wolf and my maternal great grandmother’s white horse. Many years after I wrote the first draft of Copper Sky the town of Butte erected a statue to a dog named Auditor. He belonged to the town and the miners who fed him. He lived 17 years.I knew nothing about Auditor when I first wrote Copper Sky and the four short chapters from the white dog’s point of view. Now I think maybe the inspiration for the white dog also came through an opening to the invisible world that somehow allowed me to find Auditor out there, keeping the miners company.

Butte is a town with a lot of trauma. Like all mining towns, accidents fill its history, the accidents affecting everyone. In 1895 a warehouse, where dynamite was secretly stored, caught fire and exploded, killing at least 51 people. In 1917 a cable caught fire in the Speculator Mine, killing 168 men. In 1979 my brother died in a tragic motorcycle accident. Each of these tragedies inspired the framework for Copper Sky. I’ve spent my entire adult life trying to make sense of death. The inspiration for the mystical parts of the story come from my own search for the invisible world, the other side, the quest to find heaven and God, to put the dead to rest and understand love. At its heart Copper Sky is a mining city love tale, inspired by fierce, loyal, and disturbed love, love that is ultimately a reconciling force in a community laced with tragedy.

I was honored and thrilled to first write this post as a guest for Mary Anne Yarde’s Blogspot. You can find the original here: http://maryanneyarde.blogspot.com/2017/10/authors-inspiration-milana-marsenich.html
Share on FacebookShare on TwitterShare on LinkedinShare on Pinterest