Here is the link to my guest post for Rebecca Simons’ ReviewsFeed blog. Thank you Rebecca! 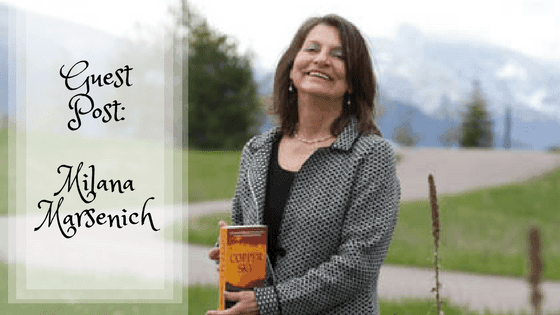 Copper Sky
I have a strong affection for my hometown of Butte, Montana, a mining town with a rich history. As a natural listener and a therapist, I’ve witnessed amazing generosity and courage in others. I first witnessed this in the Butte people. As a child, a teen, and a young adult I also witnessed multiple tragedies and incredible resilience in overcoming these tragedies. It made me think about the ways that a town affects us, especially a town as spirited and as wild as Butte, Montana. In writing Copper Sky I attempted to capture the town’s kindness, its bold spirit, its heartbreak, and its amazing courage and compassion.

The White Dog
I have always loved dogs. Huskies are my breed. Every dog I’ve had as adult has either been a husky, a malamute, or a stray that lived with a husky or a malamute. Consequently, writing the four 1895 parts of Copper Sky from the dog’s point of view was easy for me. Both the white dog and the wolf dog in Copper Sky are attempts to give the reader a close look at the town’s enduring nature. I thought of both dogs as “the town’s dog”. As it turns out, there actually was a town’s dog that the people of Butte took care of and memorialized with a sculpture. You can read about Auditor here: Auditor  I didn’t know about Auditor when I wrote Copper Sky. I learned about him after he died. I was at my father’s house in Butte and noticed an article about him in the Montana Standard, the Butte paper. Granted, he’s not a wolf dog, or any version of husky, but he definitely represents the town’s spirit: lovable, loyal, and generous.

The Accidents
Butte has had multiple mining accidents as well as frequent fires. People died all the time. Copper Camp, a book published in 1943, states that the accidents probably created 50-100 widows a year. In 1889 fire broke out in the Anaconda Mine shaft killing 6 men. A fire in the Silver Bow mine in 1893 killed 9 men. An1895 warehouse fire and dynamite explosion killed at least 51 people. In 1911 the mine cage dropped from the surface to the sump of the Leonard mine, some 1500 feet, killing five men. Later that year, before the introduction of child-labor laws, 6 boys were killed in a tragic accident in the Black Rock Mine. In 1917, the year of Copper Sky, fire broke out in the shaft of the Speculator Mine, killing 168 men. The people of Butte have learned to grieve, comfort, and understand, to absorb sorrow and transform it. They have learned to be strong, to rise up proud and full of grace, to fight for justice, to carry on. It is this strong spirit that I hoped to portray in Copper Sky.

The Orphans
Men were not the only ones to die. Women also fell prey to misfortune. They were victims of violence, oppression, and sickness. In 1918 alone the Spanish Flu killed 1000 people in Butte. As I wrote Copper Sky I wondered about the motherless children. How did the town manage so many orphans? And what was the effect of such loss on the children? As a therapist I’ve spent a lot of time thinking about the many ways trauma affects our lives. In Copper Sky I explore, not just the effects of our own traumas, but also the effects of the traumas of our parents, the traumas of a town, the traumas that happened before we were even born. I couldn’t help but wonder if the people of Butte had absorbed this ability to deal compassionately with tragedy simply by living and growing up in a town like Butte. Did their very good and generous hearts spring from a town filled with such tragedies?

The Love
Copper Sky tells the story of two women with opposite lives. Orphaned and alone, Kaly Shane suffers hardship and gets bound up in prostitution. Finding herself pregnant she struggles to find a safe home for her unborn child. She searches for a family and faces those she has loved and those she has lost. Somehow, in the mess of it all, she makes peace with her past. Marika Lailich, a Slavic immigrant, dodges a prearranged marriage. Marika wants to be a doctor. To follow her love of medicine, she tries to escape the responsibilities of family love. I like to say that Copper Sky is a mining city love tale, ful of disturbed, loyal and fierce love, love that is ultimately a reconciling force in a community laced with tragedy. When the Speculator mineshaft catches fire both Kaly and Marika help to minimize the damage of the tragedy. They find courage, strength, and wisdom they didn’t know they had. In spite of themselves, they find love.